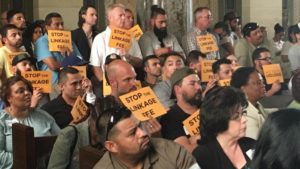 Following the lead of other California cities, Mayor Eric Garcetti two years ago proposed charging a fee on construction and using those funds to build affordable housing in Los Angeles. The so-called linkage fee — a financing tool already in use in San Francisco, San Diego and Oakland — would raise $100 million a year, city officials say. But amid mounting questions, a City Council committee last week put off a vote on Garcetti’s plan until late July or beyond.